AGGRESSION and Dog Training Courses – what is Natural canine behavior 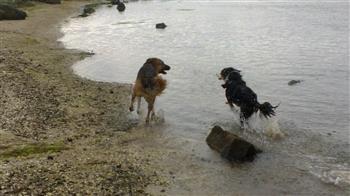 There are reams of scientific papers written about attachment theory for human babies. In the dog world this is paralleled with the achievable social level that a dog can obtain ONLY by being socialized by a wide variety of situations and dog between 3 and 6 months of age. In this case, it is a scientific fact, not just a puff opinion piece.

Dog Socialization means off lead and allowing dogs to discover how to be friendly and to play with other dogs without hurting the other dog. As all play stems from dominance (who is stronger in the pack) it can be a tight rope for a dangerous or powerful breed dog to learn social behavior from similar breeds that may not respect the early puppy age.

What types of dogs are aggressive?

A 2001 science paper researched dog aggression (227 dogs that bit) in Canada and found:

“All of the dogs had bitten either someone living in the same household, or someone who was a frequent visitor and was well known to the dog. There were 117 male and 110 female dogs” Ref 1

A side note should be that in America HALF of human deaths from domestic dogs each year, are within the family unit (the owners of the dogs).

” Aggression which would traditionally be defined as dominant or possessive had been demonstrated by 75.6% of the dogs in at least one of 17 specific situations outlined in the questionnaire. ” Ref 1

This translates to the owners should have been aware of obvious aggression in the dogs, and they could have attempted to train this out of the dogs, or socialize them or give them away, but they did not.

“Dogs with a history of this type of aggression were significantly older (P=0.02) and of lower body weight (P<0.001) when compared to the remainder of the dogs, and were more likely to be fearful of a variety of stimuli.”

The age and lower body weight seems to be a stereo-type that is actually true. What might or might not surprise people is that the dogs were often fearful, rather than overtly aggressive. That is definitely a big warning sign and often the kind of dog people get from a rescue shelter. By no means should these dogs be abandoned, but they definitely need specialist care and slow exposure to other dogs and other stimuli to overcome the fear that leads to biting.

The problem with these statistics and anything around dog bites or deaths caused by dogs, is that you can’t mention breeds without owners of those breeds going on the attack. So I wont bother here.

Taking the heat out of dog aggression

I have been around and rehabilitated enough dogs with my time on earth to know that there are very few red zone powerful breed dogs around with aggression that cant be cured by extensive professional training.

And that for the average dog that is overly dominant, or fearful aggressive, that socialisation (learning to play or handle off lead dog parks) by regular safe exposure to the parks and the dogs is the only REAL way to “cure” dogs of their anti social behavior.

Ref  1 A case series of biting dogs: characteristics of the dogs, their behaviour, and their victims. N.C Guy et al 2001