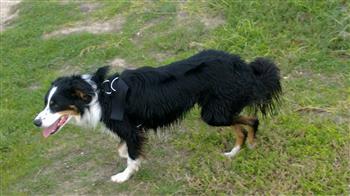 THE IMPORTANCE OF DAILY off lead walks to dog socialization

This is contrary to any other dog trainers advice, and the advice is free, and the amount you will have to spend on trainers is free, but here is the big secret (read the heading above again).

If you get a rescue dog from the pound that isn’t quite social, but is not aggressive, yes their past experiences will weight on their ability to socialize and be friendly with other dogs, but because they live in the moment, they are also much better than most humans at adapting to future experiences (as long as the thing keeping them in their present state was not so traumatic that they will never get over it) – a rare condition except for red zone dogs with inexperienced handlers.

So the good news here is, if a dog is a 50% social dog, ie that is, it is not incredibly aggressive it can be slowly introduced to other dogs in the comfort of your own yard on or off leash, with or without muzzle. You will be able to completely control the interaction ..

Once the dog has shown acceptable behavior (read up on how social dogs approach each other and interact and initiate play if you need to refresh yourself), THEN you can consider taking them to an off lead park, on lead. With or without muzzle.

The process of getting a dog to being fully social is to slowly reduce the steps of protection between your dog and others (and other owners) over a long period. It works because your dog sees other dogs and what is acceptable play. You put it back on lead when it has down wrong. You mildly verbally chastise it, and correct it, and positive reward as much as you can.

Many humans can intellectually get how to change their own behavior but choose not to, or don’t know how to bridge the gap between what they know they should do, and what they actually do in a social situation (ie meeting people in a conference or a bar).

On the other paw, dogs are remarkable in that unlike the wolf, they are geared much more to social play through the whole of their life. Even though every DOG play situation is probably an attempt to see who is stronger, and where the hierarchy lies, when two dogs are social, and they accept who is more dominant, they can easily play for a long time and enjoy it, without having to hurt each other.

Wolves can do this to a limited extent in their own very established small pack – NOT to new comers, or male wolves or a wolf of very similar ability.

It is true that the first few months that a human has a dog (puppy) is critical to exposing it to social dogs if they want a 100% social dog. If they (or you) don’t, the dog will have a cap of 80% or 70% or continuing downward socialization ceiling as the months go on, where a dog is not allowed to play socially off lead with another dog.

That said, I have personally had many client dogs where the process above or walking daily with their dog, correcting as needed, and keeping up with the dog’s socialization has brought back dogs that the owners swear would never be more than 50% social to being 80% (ie very good unless very pushed by an aggressive dog), and they can’t just rebuff or turn the other cheek – they go into attack or run mode.

A truly social dog benefits everyone one in society, and its not about dog training, its about dog walking and daily time and effort to nurture and even enjoy the walk.