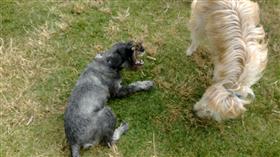 Top dog training will mean nothing, if you Let a kid abuse your dog!

After my frank and polite discussion with the mother of the child that was dragging a dog around abusing it was had, I returned home to find:

.. a curt email reply saying that I should keep out of this person’s parenting !!

Perhaps if I charged another $100 or $200 a session, they would respect my advice as much as a vets, who would probably just suggest to medicate the dog!

People will tell me that there are dog people and there are other people. Dog people apparently go over the top in respecting dogs and standing up for dog rights. The bizarre thing here was that I was not asking the client to choose between their son and their dog. Just that it is possible that a 4 year old doesn’t have the mental maturity to understand that their actions are causing the dog distress and harm.

The child laughs at the dog trying to get away, increasing the anxiety, and the mother turns a blind eye.

I had a fight with my wife about this point too, she thinks that any age child should learn to walk dogs on lead. However I know that most adults don’t understand how to use a correction chain or even a lead and collar properly on a dog when dog training and walking the dog. So how would a child automatically know what is right ?

I suggested the client allow the child to hold the lead, but she could hold the lead in the centre and regulate the pulling the child does on the dog. This was apparently me telling her how to parent!

I make no apologies to parents out there. I am a parent and a dog trainer. They don’t have to be mutually exclusive. Most children truly lack the full maturity to understand what is good for a dog, to read dog behaviour or to understand what to do in a dog crisis.

Their unknowing actions will invariably lead to them getting nipped or bitten to the point they have to go to hospital, yet the dogs will always be the ones getting blamed. And in reality it was the parent who provided bad guardianship to both the dog and the child.

Yes I see some small children out there being very responsible walking their dog on lead. I also seem them doing this with very big dogs who will pull them over in an instant when the dog decides to lunge at something (because it is a trained animal, not a human).

Responsible parenting and dog ownership usually means not leaving a dog and child in the room alone together, NO MATTER how many times you have done it before and no matter how good both the dog and child is. A dog is an animal first, then a canine, then a pet. They are trained wild animals that should be treated with more respect than most people give them credit for.

They can be very loyal, but you can push this past the limit with what they are expected to put up with in being dressed up, prodded and dragged around the house or street by collar or lead. If you would not allow your child to be abused for someone else’s amusement this way, then perhaps you should consider that is exactly what you are allowing your own flesh and blood to do to a dog you are 100% responsible for the wellbeing of.

Leave Top dog training to the experts, and train the dog and the adult human owner. Let the children know what is right and wrong, but never allow interactions that will harm the dog in any way, if you really care for your dog.