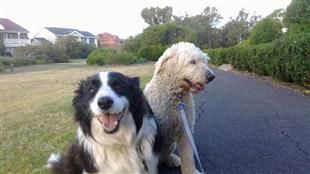 If you don’t know where your animal comes from, how do you think you will understand how to train it.

This is maybe the main difference between dog psychology and dog behavior training. If you consider that you can never know what a human is thinking let alone a dog, then you will train based purely on cause and effect. You know if you push this lever, this action will result. That perhaps is the basis of most dog behavioral based dog training.

Just because a dog’s brain is less evolved (is not as academically smart) it doesn’t mean that it is any easier to figure out all motivations for what they do, or to know what a dog will do given any set of circumstance. Yes we can approximate but in a crisis or in a situation where to choices are of equal validity (as far as a human trainer considers) how do you know what a dog will do?

Even when given a clear certainty, such as I know that my dog will always chase a post bike and go into a frenzy when he sees their jackets. I don’t know what he is thinking. I know that dogs have a strong chase mechanism based on evolution, but what is actually going through his head at the moment that seeing the bike triggers his excitement. Is he wanting to chase, kill, play, join. And what is he actually seeing? Does the postman’s bike appear to be a large revving animal?

If we knew exactly what our dogs were thinking training would be a lot easier.

Some online dog training courses will conveniently abbreviate the last hundred thousand years of dog evolution and skip to the wolf, then the present and their techniques.

Lets readdress that. The findings from DNA sampling across the globe of domestic wolves over the last ten years has narrowed the starting evolution of the first wolves into proto-domestic dogs is about 20,000 years ago.

It is believed that some of the wolves realized a survival and breeding advantage of using humans as humans did for taking on dogs. For protection, working and finally as pets.

20,000 years is a blink of an eye for evolution, man evolved over many more thousands of years, and our chain of evolution is much more complicated and debated still.

What this evolution should mean for the basic online dog training course (or real world dog training) is that dogs should be considered in three major orders of hierarchy.

1              Animal. Like all animals we have basic survival needs that must be met, and motivations to survive.

2             The canine. It evolved from wolves, so regardless of the myriad of sizes and shapes that man has shoe horned the original dogs into, their motivations still are based on what motivates a wolf to do anything.

3              The canine breed. This really influences how much of what wolf trait the dog still has in it. A husky will respond very differently to a Maltese terrier because in the breeding certain behaviors were encourage or discouraged.

If you want to know down to the micro level of how a given breed will have preference to be trained, you can either do a poll of all dogs of that breed, and see what the trainers usually do, or you can understand why the breed was created, and which skill set of the wolf is still dominant in them.

In the next article we will look much closer at part two and three of the essence of what dog you have and how its training should be adapted.