Neurological Development stages are at the core of knowing your dog 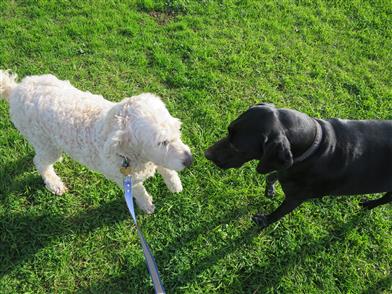 An understanding of the Neurological Development of your dog is one of the most vital things to dog training. If you have no idea of what your dog can comprehend and what it will retain, how can you properly train it.

Yes repetition, positive reinforcement all these things work, but its also very useful to know what is going on inside of your dogs head.

Recently I met two guys who were scalding their 3 month old dog for running away from them off lead and not having perfect recall. Sometimes you just want to ..

Anyway, here are the major stages of development if you want to know:

These 16 weeks are some of the most critical for every dog breed. The speed and amount of information that a puppy dog takes in during this period is believed to be great than all the other weeks in the dogs life. If a dog doesn’t get to be socialized with other social dogs during this time, they will forever not be quite friendly to humans and dogs, they will mistrust and always go for fight or flight before being friendly.

Sometimes experts divide this periods into two halves. The zero to 7 week period is all about learning to use the senses, the eyes opening, being weened, growing teeth, transition in eating food, mother giving guidance and more independence. The dog has incredible accelerated learning, but its all about its interaction with its mother and siblings.

Dogs should still interact with humans, but its only critical for the breeder or one or two humans to interact – this interaction is not completely critical to a dogs socialization or level of trust with humans.

The 7 – 16 week period is a lot more critical for a dogs overall socialization level. They cant be removed from their mother before 7 weeks, but can be removed anytime from 7 weeks to 12 (typically). Do you notice how tight these week periods are? IT is even thought that the 7 to 8 week period for a dog to be adopted by a human family is best for it. Difficult to always coordinate when owners will pick dogs up, or for dogs bought from shops. But yes every week after 8 can diminish the level of socialization that the dog can learn.

The reason you will want to react as much as you can with your dog between 7 weeks and 16 is that this is when you get a self-confident dog, one that is “well-behaved” and will listen to you. Wont act out of fear, and wont be spooked by other dogs or humans. The lack of self confidence thing si one of the major things that leads dogs to fear and fear biting, aggression and generally having no friends in an off lead dog park. Bad experiences (from other dogs, traffic or anything that overly scares a pup) should be instantly removed so that the experience is not carried on for life.

Your tight rope will be giving a dog all the experiences you can to desensitize it, but understanding when they are overwhelmed or scared, that you must prevent that experience or thing from becoming a major fear.

If you are interested in what happens next, have a look at our next blog that looks at: