Natural Dog Treats are always going to be meat, not vegetable 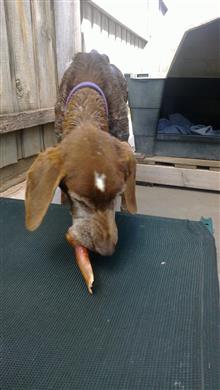 So what do natural dog treats have to do with dog training and why do they have to be natural?

Well I could tell you that I own a dog food factory and I have to sell all my grains before I go home, but that would be a lie and it would be a bad thing to tell anyone.

The least natural thing that your dog will eat, beside inorganic material is grains. Never do dogs eat grains in the wild except accidently when they eat their prey. They dont eat potatoes, they don’t eat garlic they don’t eat beans in fact very rarely will they eat any vegetable or carbohydrate. These are just cheap filler things that look good on packets to sell to humans. Sure use garlic as an additive, like you use omega 3 – but dont make it the main course !

Natural in dog terms means meat and offal and bones, things that their prey are made of, that they eat when they catch them, that is what carnivores do and why they eat meat is because they catch it and they evolved their digestion to eat meat. A few thousand years of being the servants of humans isn’t going to undo a few million years of wolf evolution.

Just like your kids and allergies and attention deficient disorders, dogs can also suffer a lot from artificial colouring, artificial taste and anything they are not supposed to have – ie grains.

If you feed your dog grains via dog food then they are getting more than enough of this filler already. Grains are often pulverised, heated to destroy nutrients and baked in oil and sugar to make them tasty – yet meat in raw form is always far more tasty and nutritious than grain cooked or raw will ever be.

If you feed your dog natural or 100% meat dog treats, you will find that you will not have any trouble with them concentrating on your commands, on getting bloated or being affected with allergies or attention deficient disorders because they are eating what they naturally evolved to eat.

Dogs can be allergic to meat, but they are just as likely to be allergic to grasses and grains. So dont assume because someone told you meat was bad for dogs that it is – very few dogs are allergic to meat – because they evolved to eat meat (or at least the wolf did) and they have the same digestion as the wolf.

Dog training is hard enough as it is, and the last thing you want to do is cause another unnecessary distraction. And if you are worried about what you are feeding your dog in treat form, then every time you are giving them some wheat or rice, in the back of your mind you will be worried, and that concern will be picked up by your dog and they won’t concentrate either.