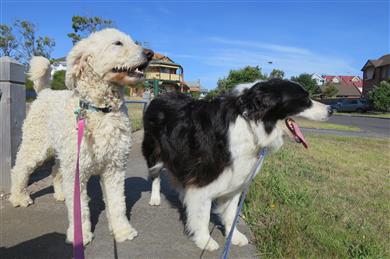 When I first read the topic of nature V nurture I thought it was about debunking the Darwin theories. Or some kind of religious attacks on Darwin or the creationists. But little did I know that it was all about dogs and whether you are allowed to have some pre conceived concepts about a certain breed of dog.

You know, like pit bulls are aggressive and king Charles cavalier dogs are cute. IMPOSSIBLE !

It is interesting about stereo-types – do they occur because they are truisms or simple minded gossip perpetuated.

Some dog sites simplify it either further – apparently its either you are pro or anti BSL.. its either a breed is generally bad and aggressive and should not be seen or its all the owners fault with the way a dog is, nothing to do with breed.

While a lot of people hate the idea of BSL, have you noticed that there are some breeds that are universally banned around the world except for the country they were developed in. Is that meaning the BSL is accepted by many countries if a breed is inherently dangerous enough and who decides this?

Dog parks and nature and nurture

I visit off lead dog parks every day, and you would be surprised if you don’t visit them, about how similarly most golden retrievers play like each other. That a lot of breeds like to associate and play with each other – see jack Russell’s flock together, and big scary guard dog or dog fighting reeds tend to not be walked in dog parks.

All I question is: are all the owners of these dogs too busy to walk them, are the dogs too hard to control, are the owners worried about what other people will think and say about their breed of dog – or is there possible a smidgeon of truth in the fact that the breeds bred to fight or guard have had hundreds of years of fine tuning their abilities physically and mentally and are predisposed to carrying out what they were created by man to do?

Doesn’t that sound ignorant, that you are hating all dogs of a given breed or the owners?

Yes it does, but is it possible that these dogs need exceptional and frequent training to be social and that a regular owner just doesn’t have the skill to do so?

Why cant councils or local area government groups regulate and police these powerful dogs and owners more?   because they don’t have money or the time?

Self regulation of dog owners, in the case of really dangerous dog breeds (the ones designed to kill large animals and used almost exclusively for hunting) should perhaps not be in urban areas?

Its like the gun lobby saying that guns don’t kill people. but guns don’t have a heartbeat, or can’t easily escape a front or back yard.

I didn’t create this website to be controversial or get haters on here, so this is where I will stop. Owners need to be 100% responsible for their dogs, particularly if there is a strong propensity for aggression and the physical ability to harm others more than the average dog.