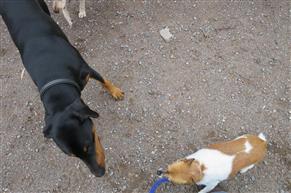 Can you imagine an attention seeking dog in LA California? No way I hear you say in unison. Surely not our beautiful dogs – but yes, a lot of it has to do with the owners.

WHAT are dog attention seeking behaviors or problems?

I am going to go into specific attention seeking behaviors a great deal more in the next article, but basically they are any thing that your dog does that is repetitive and annoying to grab your attention in a negative way.   Such things as barking, jumping up anything they can do to distract you and force your attention onto them.

Mostly we are talking about bad behaviors that are natural for a dog to try such as jumping on you with excitement when they are a puppy. but the develop into full blown problems as the dog ages or when you go out.

Attention seeking behaviors occur when dogs like to do something (we find destructive or negative) AND we never address that behaviour or we encourage it in the beginning, – THAT is when it become an attention seeking problem.

Put simply we are allowing our dogs to do something that we typically drum out of kids much earlier, because kids are sometimes easier to train, and often aren’t as cute as puppies (actually they are equally cute) but a child develops intellectual reasoning fast to understand what we consider right from wrong, whereas dogs are smart enough to often develop strategies to get around our yelling or discouraging techniques.

WHY? Well mostly because when we tell the dog off, we reward them with our attention, so they win even though they are being chastised.

It can be more complicated than that, but often inst.

The reason that these negative behaviors in dogs exist are usually OUR fault.

The number one thing to remember about dogs is that conditional rules and exceptions DONT WORK.

Children can understand that they can do certain things in exceptional circumstances, or if we ask and give them permission but dongs dont. YOu let a dog jump on you as a puppy, why cant it do it as an adult. You let your adult dog jump on you but really tell them off when they jump on someone else – that just doesn’t work. THEY crave structure and rules that they can live by and you guide them with , not wishy washy grey areas.

Note a dog will respond to positive reinforcement to doing an action when you train them. BUT if they really get a kick out of it (Adrenalin and endorphin boost) and you dont give an action that will discourage them from doing it again, ie act too neutral, they will do it again, and if they do it enough times it becomes accepted behavior for both of you and very hard to stop.

Identifying and correcting these behaviors are explained in future blogs.

But well before we do that, you need to understand that not all dog behaviour is automatically natural or without your creating.

1          The reason that these three issues fall into your control are that if you don’t walk your dog off lead early enough in their life to become social they will wither learn to be fear aggressive or nervous around dogs and humans.

2          The reason for most bad dog behavior around your home (that is not caused by a specific stimulus like a doorbell ringing) is because the dog, a pack animal has not been out to socialize, burn off mental and physical energy. They, like small children, will act out.

3          Yes, not only have you put your dogs social and friendly skills on the back burner causing them life-long stress, now they have given up and are getting fat and bored and anti social.