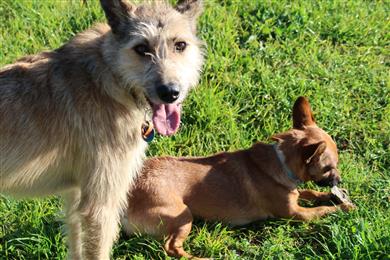 This article is about  obsessive compulsive disorders in dogs.

By medical definition for humans and dogs alike a compulsive behaviour is one that is repeatedly performed to the extent that it interferes with their normal life.  Its not just a little annoying habit but one that they are locked into repeating over and over.  It stops their enjoyment of life but also other dogs cant interact with the dog making the dog and the dogs around it less social.

When they have no control over this behavior it severely diminishes the quality of their life because they cant do any natural functions.

The result can be they might lose weight, get exhaustion or physically injure themselves. There is no freedom in life when dealing with an OCD.  There can be mental or parasitic causes. But first it is important to know what kind of dog behaviors are considered OCD.

Some of the more prominent ocd behaviors you may recognize are: spinning, pacing, fly snapping, barking, tail chasing, shadow  chasing, and excessive lip licking, toy fixation and aggression when it is removed.

When a dog has injured part of its body and the wound has healed, the repetitive licking and gnawing at the area may continue out of habit well after the healing.

If this is allowed to continue the wound often opens up and the dog can get a primary and secondary infection again.