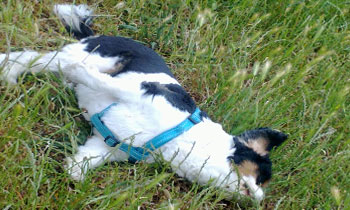 For all of the curiosity we have about dogs, its amazing that in 2015 the best thing we have to understanding how they sleep is a 1993 science paper. But I guess if it was done right, that is all we need right? Just because dogs are in California, doesn’t mean they are partying all night !

How do dogs sleep at night and day?

Dogs (canines) sleep just as soundly as humans, but for much shorter periods and more frequently .. The study that everyone refers to is shown as Ref 1 and involved 24 domestic dogs. ON average over eight hours these dogs had Twenty three (23) sleeps with an average asleep time of 16 minutes and 5 minute awake time.

Dogs evolved from Wolves only 20,000 years ago, and the wolf is primarly a nocturnal animal given the choice. Since the dog evolved and was domesticated it has had to change its sleep patterns to mostly fit in with ours. That is human owners prefer dogfs to be queit during their 8 horu sleep pattern. However as you can see many dogs find this difficult.

In the wild wolves live with a pack, so they can essentially take turns being awake and on guard, but domestic dogs often have to do it all themselves. Studies have shown that even with three dogs living together there is no coordination in their sleep patterns at night time.

The dogs awake mode during the night is essentially a protection mechanism and throwback to the days when if you weren’t able to easily wake up you would get eaten. This in theory is what makes many dogs a good guard dog – that they do sleep so lightly and can be awakened relatively easily.

So the old adage in not waking a sleeping dog is quite pertinent when one considers how short their sleep cycles are, and how deeply they have to go quickly into that mode before bouncing back out of it. This means that within a few minutes dogs can be into the equivalent of human deep REM sleep which means waking them suddenly will often result in both of you getting a big surprise.

The specific experiment carried out in 2002 (see ref 2) refers to comparisons between 16-18 year old dogs and 3-4 year old dogs. EMG and ECG measurements were taken to find differences.

” The aged dogs showed a marked reduction of PS and a fragmentation of wakefulness in the daytime and a sleep disruption in the night. The pattern of 24 h sleep and waking was dramatically altered in the aged dog. It was characterized by an increase in the total amount of time spent in SWS during the daytime followed by an increasing of time spent in wakefulness during the night.”

In layman’s terms this means that older dogs (like many humans) suffer from daytime drowsiness AND have difficulties in sleep maintenance (ie staying in deep sleep and sleeping soundly at night). The ‘abnormality’ in sleep-wake cycle of older dogs “might be reflected by the altered autonomic balance.” So don’t be surprised when an older dog is sleep walking down the corridor at night time