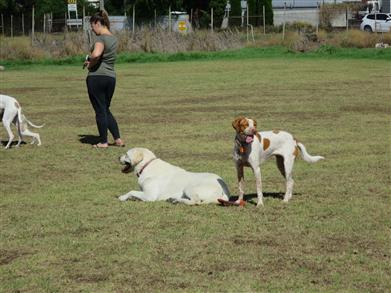 A few dog vet articles will initially describe to you what FEAR IS. How it can be a rational or an irrational feeling of apprehension based on a person, dog or inanimate object. Fear can be real and justified or an unnatural obsession a dog has created in response to a situation. the usual automatic response is to fight or run .

While fears rational or irrationally generated are spontaneous. However when a pre-planned dread which is “persistent and excessive fear” occurs to a specific stimulus such as thunder occurs- then that is a PHOBIA.

Once a dog has suffered an extremely fearful event such as a loud noise, the things that were associated with it (such as dogs howling, fireworks in the distance (doesn’t even have to be loud) will recreate that fear in the dogs head and they will suffer the equivalent of a panic attack.

They will essentially play the loop of a fearful event and imagine the worst over and over in their mind, and NOT be able to be living in the moment as we expect their normal state to be.

DOG ANXIETY is not a PHOBIA

A dog can be anxious, but not have a phobia towards and specific stimulus. Anxiety is considered an “anticipation of future dangers from unknown or imagined origins” meaning anxiety often accompanies a PHOBIA (i.e. some things can trigger the dog to be anxious leading up to an event that will be a full blown phobia. But these two are not the same.

The most common anxiety is dog separation anxiety. This can be related to certain breeds of dogs, but essentially having a highly strung dog that is not exercised, and is closely bonded to you, will often suffer anxiety when you leave – their pack is being separated. They have an anxiety and feel anxious about the event but its not a PHOBIA (an irrational fear creating a fight or flight situation).

idiopathic fear = Profound fear and withdrawal of unknown cause

the breeds most prone to this kind of fear are: