Did you know that Dogs dream and they replay events of the day. 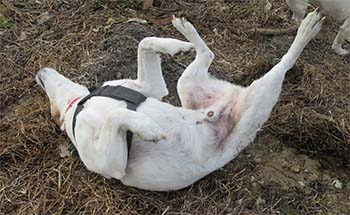 What do dogs dream about?

We have all seen dogs dream sequences in Hollywood movies. Its been so commonplace that it is almost accepted that they dream kin color and in natural sequences just like a movie scene, but is it true?

Well a 2010 science paper shows that ” during sleep the brain wave patterns of dogs are similar that of people, and go through the same stages of electrical activity observed in humans, all of which is consistent with the idea that dogs are dreaming.”

But of course just a bunch of electrical signals happening as a dog’s eyes flicker would not be conclusive evidence of anything.

And of course anything to do with science tests seem to be traced back to testing rats. The theory being that if rats are near enough to humans to test for dream states, the more intelligent creatures such as dogs are surely going to have at least the same kind of “dreams” as rats.

The paper showed that ” if a rat ran a complex maze during the day he might be expected to dream about it at night. While a rat was awake and learning the maze, electrical recordings were taken from its hippocampus (an area of the brain associated with memory formation and storage).”

It was ” found that some of these electrical patterns were quite specific and identifiable depending upon what the rat was doing. ..when the rats were asleep and their brain waves indicated that they had entered the stage where humans normally dream, these same patterns of brain waves appeared. In fact the patterns were so clear and specific that the researchers were able to tell where in the maze the rat would be if it were awake, and whether it would be moving or standing still.” ref 1

The testing on dogs was done after the testing on rats. They suppressed the part of the brain that STOPPED the dogs moving during dreaming, meaning that the dogs were able to physically act out anything they were “dreaming” about, during their sleep.

” Researchers found that a dreaming pointer may immediately start searching for game and may even go on point, a sleeping Springer Spaniel may flush an imaginary bird in his dreams, while a dreaming Doberman pincher may pick a fight with a dream burglar.”

So rather than just collect a set of electrical signals an infer what might be happening during REM sleep (or its equivalent in dogs) , they were able to show dogs acting out physical movement mimicking their day tasks as they were sleeping. Sort of like human sleep walking states, but instead dogs just replaying memories of their days adventures.

It is believed that most dogs achieve deep sleep (except very old dogs) within 20 minutes of falling asleep if not sooner. The dreams are accompanied by shallow and irregular breathing, body twitching and maybe small barks. The movement of the dogs eyes behind their eyelids is actually them moving their eyes to track targets in their dreams. It is not random twitching.