TOP DOG TRAINING – keep the children out of it 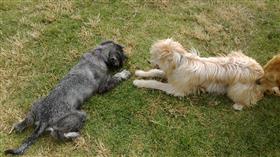 TOP DOG TRAINING often means keeping the children out of it

I very recently had a run-in with a long term client that has almost severed our relationship. Ironically it was about dog training but indirectly she thought it was about her parenting!

This is the scenario. I often have to transport this persons dog with other dogs in a vehicle. Her dog is an old jack Russell cross and up until recently it has been fairly well behaved. It was a rescue dog and would occasionally get annoyed in play when it was being chased a lot, but usually it would just turn around and do a nip and the game would end. No problem, it was just telling the dog, fairly socially, that it wanted to stop.

Then a few months ago the clients dog started growling in the back of the car when another dog jumped in, (they are all chained to the car by dog harness for safely and legal transport requirements). Then it got to the point where the dog would start wanting to do little nip attacks on any other dog that entered the boot space.

This is not a great thing when you are trying to achieve social dogs, and have dogs trust you for training purposes.

Dog training a dog, when the children are at fault

It got to the point where we had to get a bark muzzle for the dog, just for car travel. not a full bite muzzle, but of course not all people will understand the difference and will complain that this dog is being transported at all. The dog was social just going through some issues, so for all safety concerns a muzzle as used.

This snarling and nipping issue in the car would seem to come and go. We couldn’t find a physical ailment and some people would just put it down to age, dementia etc, but I wasn’t convinced.

she nearly went to the vet to try and resolve the issue, but I started becoming aware that the client allowed her young son to do almost anything with the dog.

Would you allow a child to drag a dog around by a lead or a collar on polished floor boards etc? I don’t care how young the child is, I care for dogs, and this was irresponsible dog ownership. This was causing the dog distress which it was transferring to other dogs.

When an owner cant put basic dog safety into place, I have to consider is it worthwhile still working with them.

For the rest of the story, follow the next two articles ..