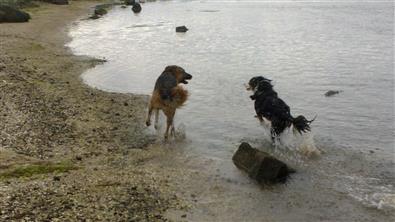 We have just previous to this article looked at what attention seeking behaviours are and what general methods are used to dog train your dog out of them.

Below we look at the top 2 of the most common dog attention seeking behaviours and how to deal with them. But remember a behaviour only becomes a problem to be solved when you decide you don’t like it or society does.

The Top 2 Dog Attention-Seeking (or addictive) Habits (we look at the most obvious ones are first):

Jumping up on you (or others)

Is about being your dogs pack leader. Apparently if he jumps on you, he is alpha dog. This makes sense from a dog park perspective. The dog that is jumped on is being dominated and lesser status in the pack. You will only extinguish this behaviour by being the pack leader.

Sure its about being calm and assertive but its about not giving in to your dog an consistency. Like when they are bad as a puppy ignoring them and turning away, not allowing them to get purchase on you is the way. Make a fuss, yell and add excitement energy to the situation, and they will try and do it more, and dominate you more, as you are actively resisting their domination.

The only way is training your dog when there is no real guest at the door, get them to sit calmly and then and only then reward them. They jump or move from the spot, they get ignored again. The pack animal in them craves attention more than dominating you.

Barking or whining at you

Dogs bark for many external reasons. some of the main ones are:

Dogs rarely bark for no reason or without someone to hear it. They are demanding you pay attention to a real or perceived threat or fun thing to do (such as throwing a ball or getting a treat)

The thing you need to do is work out if its a legitimate bark (ie they are doing their job and warning you that a burglar might be about and you should investigate- or if they are barking through habit at a stimuli that is not even there.

The dog barking is there communication to you and if you ignore it, you are silencing them and not building trust with them, they may not trust your instinct or want to work with you if you dismiss them so easily.

How to stop barking behaviour

Some people will use head halties to close a dogs mouth manually but some people find this not an acceptable method of training.

A preferred trick is to use distraction. Get them to have something else in their mouth. Some people get a dog to retrieve something or have a ball in its mouth etc. This is good as long as you don’t make another bad habit where a dog won’t give up a toy and gets aggressive with dogs in dog parks because they want to play with them or their toy.

One of my favorite things is to get my dog to sit be calm be focused, shake paws then get a treat. it completely distracts them from why they were incessantly barking at me to get my attention, it puts them back under control with another remembered training move, and usually results in the end of barking at least in the mid-term.