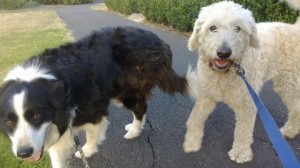 This would be the action that most annoys dog trainers and critics of Cesar Millan. However it appears that most people take a black and white view of the action.

Looking at the history of early dog training techniques, often involving negative punishments of physical force or hitting and kicking dogs the field has swung fully in favor of positive reward techniques where no physical (touches) are used.

If you believe in Cesar Milan following the most natural methods replicating a dog’s mother, you may wonder where a foot tap fits into this. I whole heartedly agree with his method of using your hands to mimic mouthing of the mother dog, however I am a little reserved when it comes to the foot tap.

Not so much because of the anti Cesar brigades view of it irreparably destroying the dog’s confidence or similar reviews, but because not everyone is as good at applying the subtle technique and application that is required.

I also feel that it should be reserved for the most difficult of cases and probably not applied as liberally as he seems to apply it. In one of his books he admits to using it in over 30% of dog cases.

Removing Cesar from the equation I will tell you how I have observed the dog foot tap being used. It is almost exclusively practiced in local dog parks as some kind of parlor trick to impress friends, or because people are lazy. The idea seems to be using the leg on the opposite side of the dog to do a swift short ankle tap to a dog’s rear leg or abdomen while walking at normal speed.

This action naturally involved considerable timing and often results in a clumsy heavy kick to a dog. It is no longer about the surprise factor but about making the dog feel pain to discourage it from its action. Of course like any correction the dog will have to work out why it is being punished and work out if the person deserves to be feared or followed.

The whole idea of using the opposite foot seems to be to trick the dog that the kick is coming from someone else, or that it can happen at any moment, so it always needs to be on guard. This can thus add anxiety to an already unstable dog.

Perhaps ideally the foot tap is just supposed to protect a person’s face and arms from a potential bite (an understandable reaction from many dogs who are ‘tapped’).

Of course besides potentially the foot tap making a dog more timid, you also risk a dog being more aggressive towards you. You may find that many dominant dogs may respond to a kick with barking or biting, not submission and compliance.

If the technique is to be widely accepted and practiced by novice owners it would probably need to be used in exceptional cases, and somehow practiced well beforehand and not on dogs. I find one of the major issues is that it seems to invoke a sadism streak in many people.

It is like the laziest thing that a person can do that can’t be bothered reaching down, using hand gestures or stopping walking. In an experts hands, with the right application, with the right intentions, perhaps it is the ideal tool. BUT for the majority of owner’s I doubt that it should be used at all.