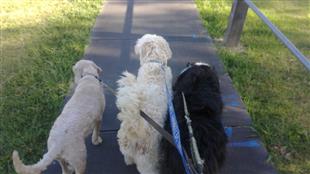 Dog training courses and the importance of dog evolution theory

The previous article considered why dog evolution is so important to understanding the motivations of the domestic dog or companion dog.

It revolves around the following premises:

1 The canine evolved from wolves, so regardless of the myriad of sizes and shapes that man has shoe horned the original dogs into, their motivations still are based on what motivates a wolf to do anything.

2              The canine breed importance to dog training! This really influences how much of what wolf trait the dog still has in it. A husky will respond very differently to a Maltese terrier because in the breeding certain behaviours were encourage or discouraged.

In this article we will look at premise one only.

Why dogs evolving form wolves is important to dog training

Yes we can go back to where wolves evolved from and further back up the tree, and it is insightful, but since most trainers don’t properly utilize the fact dogs are basically commercialized wolves, the deeper analysis goes missing.

Most motivations for wolves revolve around the wolf pack security, hunting/ eating and protecting the survival of the pack (the alpha couple breeding) – though some behaviorists discredit this last point.

Much has been written about how wolf pups and dog pups have very similar play methods, and how the mother trains the pups about being social (as occurs in most mammal species), but the major adult wolf behaviours are often forgotten.

A wolf is a dominant predator in many of its environments for good reason, it is a brilliant fearless hunter that uses amazing pack cooperation, with speed and endurance to secure food.

If man had not gotten smarter when they did, and if the wolf hadn’t evolved to be larger faster and smarter, we might find the wolf enslaving the “domestic man”.

In dog training many trainers use the hunt and tracking skill of the wolf to shape a dogs behavior. Dogs love to hunt and cooperate with the pack. If you the trainer are their pack leader, and they trust you, there isn’t much that they won’t do, to secure the survival of the pack. Being rewarded with food means that their pack position is assured.

One of the most interesting aspects of training is the RECALL. Without recall very few people let their dogs off lead. But where did recall come from? A wolf hunting in the wild kills the animal, then takes its major share and then allows other wolves to feed, and brings some back to the pack members who stayed at home (the den) or region they might bury the carcass in if it is large. They don’t bring a kill to the alpha dog standing 20 m away and accept a dog treat for their troubles.

That is why the cooperation of the dog on recall, a subversion of the pack run and kill is such a remarkable thing and something that has made domesticating the dog doable.

And this is why retrieving a ball is such a great way for an owner to establish recall. Just making a dog come back to you for no reason is very difficult, Yes they will come back for treats, but some people don’t like the idea of ‘bribing their dogs’ and will eventually have to wean their dogs off a reward each time for return – and doing that too quickly can have a dog choose not to recall at all.

Making a dog retrieve a ball or object is a perfect halfway house. It simulates the dog chasing something and killing it (hence the head shake move) and when they bring this dead thing back to you, they get rewarded for their successful hunt by you the alpha. What could be more perfect in a converted wolves mind?

The big thing is not to over do the retrieving so it bores or stresses the dogs, as some dogs can become very obsessed with ball retrieval and very anti social to other dogs and humans if the task is repeated too often.

this of course is just one aspect of why knowing what a wolf loves to do, and encouraging your dog to do a dog training behavior can work for you. I always feel its better knowing the reason behind something rather than just that “it works”.