Alpha roll, what dog training technique is this? 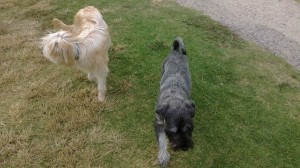 This technique involves rolling a dog on its side and restraining it by mimicking a mother dog’s mouth on a dogs neck.

Critics say that the method is dangerous for timid dogs and aggressive dogs.

They say that in nature a dog doesn’t to lift and roll an upright dog on the ground.

“It is leadership by showing a good example, not dominance, that AVSAB says owners should strive for in relation to their dogs. The organization’s statement, which does not explicitly name Millan but references his terminology and some of his controversial techniques, argues that dominant-submissive relationships that do occur in nature are a means to allocate resources — a problem that rarely exists between dogs and their owners. (Nor even, AVSAB notes, among feral dogs, which live in small, scavenging groups without alphas controlling access to food and mates.)”

It would appear that the alpha roll is universally discouraged (on blogs at least).

I have to say the first time I tried it on my dog, my technique was clumsy. I did it because my dog was being aggressive with me when it got wet down at the beach. They were barking in a frenzy and trying to bite me, trying to control me, basically being out of control. Turning my back or being quiet was not working.

I could not easily catch them, so the alpha roll had to wait, and sometimes when my dog was very worked up, it was difficult to hold them down. They were not in pain, but they clearly did not want me dominating them, me changing their behaviour. HOWEVER I found that as subsequent alpha roll episodes happened (not every walk) that my dog knew what to expect. He still hated me controlling him, but it was not because he was in physical discomfort. I put him on his side gently  and typically on grass.

He would struggle to get his head up, but I did this where no other dogs could come around to dominate him. I used it as an extreme measure and it seemed that typically it might take up to a minute or two until he stopped struggling. When I released him, he would get up, shake it off, and walk away in a much more subdued mood. He did not show signs afterwards or wanting retribution or being fearful of me. The amount of cortisone in his blood from this ‘episode’ was probably the same or less than would have been generated by me letting him to continue running around me, barking at me and trying to bite my hand or ankle (all in excitement, not to cause harm).

I realise in writing this that many people will visualise a very cruel act that I have performed. And truly in the wrong hands, or by a person who is reacting angrily to their dog, rather than with compassion or positive intentions, a bad experience can be had by all.

I will keep reading about this technique and its critics now that I have become aware of the massive move against it. As an adult dog, I have not done the alpha roll for a few years on my dog. It is never supposed to be used regularly or for long term.

It may be a last resort move, but when your dog is out of control and every other dog training method has failed, you may consider doing some version of it, GENTLY.