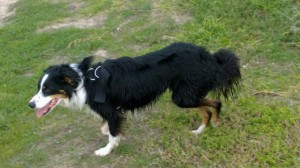 Hand as mouth correction (57% of time)

This is a very novel method that simulates the mother dogs soft mouthing of a puppy to let it know when it is on the wrong track with its play or behavior. It typically involves the trainer/ owner doing a quick pincer movement of the hand (thumb against four fingers) on the side of the neck of the dog.

It works because of its ties with what it used to get from the mother as well as the shock value. The dog doesnot expect its owner to be so ‘hands on’ with it.

It does not involved hitting or pinching or any physical abuse of the dog, just holding in this position, and often accompanied by verbal commands in a low tone.

It is also very useful when a dog has done something particularly bad in the park to put the dog on its side, and hold it gently to the ground, while using the hands on neck movement.

Again it is not to harm the dog, and doesn’t always work well when there are other dogs around, but it is something that the dog doesn’t like, and a strong show of domination by the owner. it soon realises that it doesn’t like this and will usually choose to reduce the behaviour that causes such a situation.

Be aware that this will not work on more powerful dogs (putting on the side part) and dogs that are very dominant and prone to aggression. Not red zone aggression, but the kind of dog ‘personality’ that will just get revved up by such actions. Becoming proficient with this technique is trial and error, and you may want to watch real trainers in action using it to give you visual guidance.